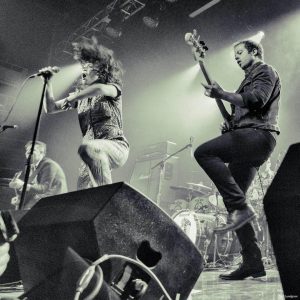 (Facebook)
I was pulling into my driveway on a late night in the cities this summer when a song came on that paralyzed me. Even though I had arrived home at what was probably 1:30am, I could not turn the car off for fear of missing out on this spectacular song…it turns out that the song was “Loosen the Chains” by Kiss the Tiger, who describe themselves as “female-fronted, five-piece, rock ‘n’ roll troublemakers from Minneapolis.” When I heard they were coming to play a show at The Aquarium here in Fargo, I just had to catch up with them about their music, the Minnesota music scene, and more. Here’s my interview with lead vocalist Meghan Kreidler:
Chris Cartwright: Hey, welcome to Fargo-Moorhead! We know you’ve played a ton of shows in the past year – what’s one of your favorite shows you’ve played as a band, and why?
—
Meghan Kreidler: One of our favorite shows was in Louisville, KY at Mag Bar this past spring. It was the last show in a small Midwest tour we planned and we wanted to go out with a bang. Luckily we had a killer crowd and 3 of the 4 bands we were supposed to play with had bailed last minute, so it kind of worked out where it felt like the night was ours! I think by the end of a tour you’re tired and all of your expectations go out the window so you can actually have fun and be more in the moment. That night we had an amazing synergy with the crowd and it still remains one of our most memorable shows.
—
Chris Cartwright: We were excited to hear you’re joining Fargo’s own D Mills at the 331 Club in a few days for a night of Asian-Fronted Bands! What can you tell us about this upcoming show?
—
Meghan Kreidler: We love Diane!!! The night is going to be killer. We wanted to piggy back on the success of the movie Crazy Rich Asians so we put together an evening of music featuring three Asian-fronted acts. Crazy Rich Asians is making history as the first Hollywood film to feature an all Asian cast in 25 years and it’s been super successful, and we thought there’s no reason why an evening of music featuring Asians in a similar way can’t be just as successful. We’re hoping it might lead to similar showcases in the future, or even a regular night that could expand to include Asian identifying visual artists, dancers, photographers, and other musicians.
—
Chris Cartwright: We’re coming up on a year since you released your Elliot Park EP and a few months since “Loosen the Chains” (which we LOVE here at KORD!). Can we expect any new stuff from Kiss the Tiger anytime soon?
—
Meghan Kreidler: Yes! We are releasing a full length album at the end of the year. The release show will be on December 8th at Mortimer’s in Minneapolis. We will also release another single from that album sometime between now and then…
—
Chris Cartwright: We have such a wonderful music scene here in Minnesota. What are some of your favorite things about being a part of this community?
—
Meghan Kreidler: There is such an abundance of live music happening all the time. If you want to see music on any night of the week, you can. We have a rich history of music here as well, which I think is the foundation on which our music scene exists and thrives. There’s also such a wide array of genres that are present and uplifted in the community, and artists that aren’t afraid to step outside of the box and try new things. The Minnesota music scene helps cultivate unique voices by honoring and uplifting them.
—
Chris Cartwright: For audiences new to your music, what can they expect from a Kiss the Tiger show?
—
Meghan Kreidler: Kiss the Tiger shows are upbeat and energetic, and I mean that in every sense of the word. As the front person, I don’t take any performance opportunity for granted, and I know the band feels the same way. We love to play. No matter how big or small an audience, everyone deserves a great show. We love playing in new venues and are super excited to be making our Fargo debut TOMORROW NIGHT. We will be giving life at The Aquarium tomorrow night, if anyone wants to partake in that sort of communion, we hope to see you there 🙂
—
And there you have it! Kiss the Tiger will be playing alongside Galactic Cowboy Orchestra and Silver Daggers at The Aquarium on Friday, Sept. 28th at 8pm. Tix are only $10 and you can purchase them right HERE.
As always, catch me on KORD Radio every Thursday from 11pm-midnight for The Home Stretch – and don’t forget to check the schedule for so many other great shows!
Stay Spicy,
Chris Cartwright
Tweet